I am an artist, deep in the center of my soul. I have many roles in this life, but I think perhaps more than any other, artwork is at the center of it. The medium may vary–hides and bones, words on the screen, ingredients in the kitchen, a carefully considered response to a counseling client’s thoughts–but at the heart of it all is a deep need for creativity and expression, arranging things just right. Most of my visual artwork for the past fifteen years has been with the dead critters, but I do like to branch out–I don’t want to be a one-trick pony, after all. One of my passions is art made from secondhand materials; this does describe some of my hides and bones, but I also want to reclaim some less biodegradable things as well. So I do like having a bunch of found objects to work with, things salvaged from thrift stores and free piles on the curb and so forth.

Because of my current counseling job, which keeps me busy 40+ hours a week, I don’t have as much time for art as I did before, and a lot of that time is spent on keeping customer favorites stocked in my Etsy shop. But sometimes I do manage to make time to really dig into more unusual projects, stretching my artistic muscles. Today I took out a couple of hours for this: 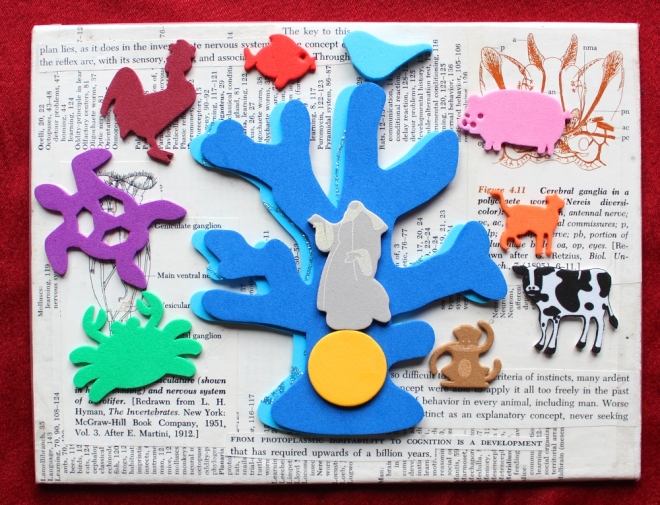 Click on this to get a bigger version of the image.

It’s called The Natural Order of Things, and it’s almost entirely made of recycled materials. The 6″ x 8″ canvas panel it’s based on was bought from a yard sale. The book clippings were from an old-but-not-rare, quite outdated textbook on animal anatomy that I bartered for. The foam cutouts came from a Goodwill on the Oregon coast. All I had to add was a few brushfuls of Mod Podge and a bit of cellophane tape.

It looks simple enough at first glance–brightly colored bits of foam on a stark black and white background. The tree of life branches out from the center, with an array of animals taking up their places as they should. But upon closer inspection, the animals are in no real order; rather than closely-related families being situated nearer each other, a fish is next to a bird, which sits just above a pig, and so on. Moreover, there’s only one invertebrate, a crab in one corner. The representatives of the animal kingdom are largely biased toward mammals, especially those we feel are important. And at the center of it all is humanity, represented by a god-like figure (Yahweh? Zeus?) standing on the sun. Humans are removed from the tree of life, only to be relocated at its center–“Man shall have dominion over the earth”. As if to comment on the misinterpretation of evolutionary theory that says “Humans are evolved from monkeys!”, a tiny monkey occupies the smallest and lowest branch on the tree, decidedly separated from its Homo sapiens cousin.

But what supports these animals and their tree? In the background the canvas is covered in pieces of pages from a textbook of biology. The foundation is the index, listing many animals in neat, alphabetical order–to include, along the bottom edge, “Man”. Over this are laid diagrams of the nervous systems of a rotifer and a polychaete worm, neither of which are particularly well-known animals, but which illustrate the type of simpler nervous systems from which those of vertebrates evolved. Several quotes add to the mix–one about the basic plan of the nervous system in all animals, one about how humans have often misapplied “instinct” to anything any animal does ever, and one, legible in full: “From protoplasmic irritability to cognition is a development that has required upwards of a billion years”. We extol the virtues of a select few noble animals, while we stand on the spineless backs of countless humbler creatures. Despite claims of religions worldwide and throughout time, we did not spring forth fully formed from a head or a thigh or our partner’s rib bone. We are built on billions of years of tiny changes.

The cartoonish, artificial figures in their disarray, arranged inaccurately around humanity as the reason for their existence, represent the biases we hold toward the natural world. We value what most closely resembles us–vertebrates, and especially our fellow mammals–and most of all, those who directly serve us. The man-as-god in the center is our tendency to elevate ourselves above all else, much to the detriment of all involved, humans included. One can only stand on the sun for so long before getting burned. In contrast, the neatly ordered, realistically rendered invertebrates speak of the care that has been taken to excise the secrets of evolution and other natural processes, sifting out the detritus of superstition and speculation. This brightly-colored Eden can dance all it wants, but those who wrote the stories of paradise could only do so after a parade of many generations of supposedly “lesser” beings.

But it’s also because of these pioneering beings that came before us, unknowingly contributing to the shift and change of genes and their expressions, that we can also have art. We can have religion, including beliefs that don’t match with evolution in any literal way but have their own beauty nonetheless. It’s because of them that we’re here to debate our origins today, to take strong opinions and fence with them, or to simply decide the argument’s not worth it and go play video games instead. I am grateful to them for this opportunity, and I dedicate this piece to all my ancestors, all the way back to the beginning of life.

2 thoughts on “The Natural Order of Things”

All content in this site (save for the Wordpress-specific layout/etc. material) is copyright Lupa, 2007 - present. You may distribute this ONLY by cutting and pasting the URL of the page you want to refer to. Cutting and pasting the text of a page, either in part or in whole, is prohibited except where properly cited and within fair use provisions. Internet-published material is protected under the same copyright laws as printed material. However, if you ask permission, I tend to be a nice person. Feel free to contact me at therioshamanism (at) gmail.com.
%d bloggers like this: