A long time ago, the world was a lot different than it is now. There were no seasons, no changes in the weather. If you wanted snow, you had to go to one part of the world. If you wanted sun, you had to go to another. And everybody had to bring back rain from the only place in the world that had it, though it got enough for everybody. Since the animals couldn’t only have rain or only sun, there was a lot of moving around, and you didn’t have so many animals who stayed in one place. Some animals hardly ever saw another of their kind, but others would organize reunions every so often so as to not get lonely.

So it was that every seven years, all the foxes of the world would come together in one place for one great conclave. Long-separated friends caught up with each other, families introduced their youngest kits, disputes were addressed and resolved, and at night there was much celebration to be had. It was all rather a busy affair, as one might imagine would happen with that many foxes in one place.

It just so happened that one year, there was a contest over which fox was most beloved by the Earth, who gave the foxes’ paws somewhere to go. Finally, it came down to White Fox from the North, Black Fox from the East, Red Fox from the South, and Gray Fox from the West. Everyone agreed that these were the very best, cleverest, swiftest and strongest foxes of them all. They spent an entire day debating who was going to be elected the best fox when the Earth would make her presence known that night. They had heard that the very best fox would receive a special gift from the Earth, and they each wanted to prove they deserved it.

“She’ll choose me,” White Fox said, “because I am the only one who holds the cold snow and ice with my tall, proud mountains!” And everyone agreed that his mountains were indeed quite impressive.

“Nobody likes being cold, silly thing,” said Black Fox. “She’ll choose me, because I carry the soft, warm winds that help new seedlings to grow.” And all the foxes assembled thought she made a very good point.

“Ha! Just a little warmth? I’ll give you all the warmth you need with all the sunshine you could ever want!” declared Red Fox. “That’s why I’ll be chosen!” There was a good deal of agreement with that, as basking in the sun was a favorite activity of foxes all over.

“Surely we cannot have any snow or plants or cooling off from the sun without rain,” said Gray Fox. “I have the most water, which means that I’m sure to be the one the Earth will choose.” And the other foxes licked their chops at the thought of cool, refreshing rain water to drink.

But who would be chosen? The four foxes fell to arguing amongst each other, and had almost come to blows when there was a great trembling beneath their paws, and the Earth made her spirit present as a great, glowing golden Fox. “Dear children, what are you doing?” she asked.

“We were trying to figure out who you were going to choose as your favorite fox, and we can’t all be your favorite!” the four foxes said.

The Earth thought a moment and looked at each of the little foxes at her feet, each one so strong and talented in her or his own way. Then she smiled.

“Of course you can all be my favorites. Why choose one among you when all four of you have so much to offer?

My lovely Black Fox, you are the deep, rich soil which allows all the plants to grow healthy and strong. You take what has died and rebirth it as new living things. Your warm winds help to bring life to the land. Therefore, I will give you the first part of the year, when my friend the Sun is on his journey back here.

And you, bright Red Fox, you give the Sun a place to show us his strength the best. You allow him a place to set down the burden of rays on his back, and unwrap them so that all of us may see them and enjoy their warmth. To you, I give the second part of the year so the Sun may share with us every year.

Dear Gray Fox, your rains are invaluable to us all; without water we would be parched. I give you the third part of the year, where your rains may be the tears that bid farewell to the Sun as he leaves again, and your bright colors will be reflected in the leaves of the trees as they wear their finery to see him off.

Oh, beautiful White Fox, I haven’t forgotten you! Your cold climate cries out to the Sun for what warmth he will give, and your snows reflect his rays so that he can see this land no matter where he goes. To you, I give the final part of the year, to remind the Sun of us when he is at the farthest part of his travels, while we await his return here.”

And so it was that every year after that, all the places of the world received the gifts of the four foxes, each one in turn. Of course, each Fox had her or his own favorite places where they might tarry a little longer. But the animals no longer had to travel so far just to get sunshine or rain, or to get out of the cold or the heat. And so all but the most adventurous were able to settle down and create nests and dens, and allow the seasons to come to them. 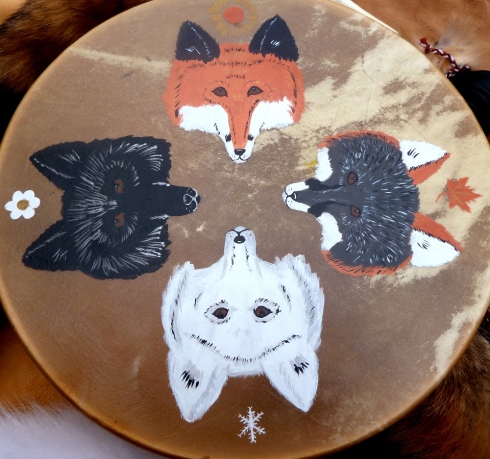 Fox drum, acrylic on deerskin with fox tails, by Lupa, 2011

Just a quick crosspost–my new post is up at No Unsacred Place; it’s called Carl Sagan’s Cosmos: A Pagan Perspective. I recently watched this amazing series, and the post has some thoughts on how it can mesh with pagan spirituality, as well as a very brief ritual idea using it for an immersive experience!

Just a quick note as I am busy with writing and art and family and holidays and, and, and–you get the idea.

But I wanted to share my two latest posts over at No Unsacred Place:

Shapeshifting into Kin: Part One (the theoretical bit)

There are many purposes for shapeshifting—celebration, drawing on the power of the being you’re changing into, learning to change yourself, etc. There are also many techniques, some stationary, others involving dance and other movement. This version of shapeshifting is quieter, and is primarily for the purpose of creating connection with, and fostering awareness of, other beings. It’s a way to begin healing the rift we as a species have created between us and the rest of the beings we share this world with. It requires a certain level of intimacy; you can’t become a being without having some empathy for it, and the world could certainly do with more empathy all around.

This past weekend I set up a vending booth at the Yule Bazaar. The first day was held down at the Unitarian Universalist church in Salem, OR, and the branch of organizers there had arranged for a group of traditional Aztec dancers to come and share some of their dances. These weren’t white people “inspired by” the Aztecs; these were folks in the broader Hispanic community here in the area who had connections with people in Mexico who had still hung onto pieces of the indigenous Aztec lore. This was knowledge that had gone underground as a result of the genocide perpetrated by Spanish invaders, and over the past fifteen years or so there’s been more of an effort to try to combine what’s left and recreate the traditions.

One of the dancers spent a good amount of time giving a lot of context for how the knowledge had been revived, and what the importance of the practices was. I was especially fascinated by the assertion that each footstep, each move, in each dance had its own special meaning and piece of lore; the shell-covered ankle cuffs the dancers wore that made lovely ringing noises as they moved represented the various sounds that running water makes–not just THE sound, but many sounds. The spear that one of the dancers carried wasn’t a weapon, but a tool to pierce through to truth. And so forth. I paid close attention to each individual step and move, the voices, the conch shells and other tools, how everything flowed. I was awed and humbled.

It’s not my first time watching other cultures’ dances; I’ve seen dancers at powwows, for example, though it’s been many years. However, probably due to my age and better context this moved me even more than those earlier beautiful experiences.

What struck me the most was just how rich in symbolism and meaning every element of the dance was. I realized that what I am creating here in some ways pales by comparison, not because I’m not sincere or not trying hard enough, but because what I was watching had been developed from the observations, experimentations, and sheer creativity of thousands upon thousands of people over many generations. All of those people had contributed their day by day observation of the sounds of rivers, or the bright colors of bird feathers. These were woven into centuries of myth and legend, art and dance and other expression.

So many of us practicing neoshamanisms simply don’t have that sort of shared community support. Getting together once a week for a drum circle, or once a month for a full moon ritual, can’t compare to a community living on the same piece of land with the same people for many lifetimes. We can have good friends, and we can have good family, but so many of us live far away from our families, or have families who are not supportive of our paths. Friends move away; we move, too. I have moved an average of once a year since 2001, and am now in my fourth state. I can keep up with old friends online, but it’s not the same.

This is not to say that I am deterred. But it does offer me some idea of what is missing in much of neoshamanism, and some direction in further developing my own practice. I can’t necessarily create community, and it’s highly unlikely that I would given how much of a solitary I tend to be. But I can at least explore Meaning more deeply, and connect it to more than just intellectual understanding of “This is what North means”. Which is a lot of what I’ve been doing anyway, but I have more inspiration now. Not taking from the Aztec dancers, of course, but looking at my own relationships.

All content in this site (save for the Wordpress-specific layout/etc. material) is copyright Lupa, 2007 - present. You may distribute this ONLY by cutting and pasting the URL of the page you want to refer to. Cutting and pasting the text of a page, either in part or in whole, is prohibited except where properly cited and within fair use provisions. Internet-published material is protected under the same copyright laws as printed material. However, if you ask permission, I tend to be a nice person. Feel free to contact me at therioshamanism (at) gmail.com.